Andina Acquisition Corp. III (ANDAU), which filed their last registration amendment on January 4th, with an anticipated pricing date of January 24th (20 days later), is now rumored to be pricing on Monday, January 28th, instead.

Is this significant? Hard to say. Maybe Cowen just prefers to price on Monday rather than Thursday.  However, it is typical that once a deal is effective, you price within 24 hours. Notwithstanding that, we are in a very unusual situation with a government shutdown and anything “typical” is thrown out the window. Regardless, all signs point to NO SPAC pricings this week.  However, that also means we have a banger of a week next week:  Andina III – pricing on Monday, Gores Metropoulos – potentially pricing on Monday, Pivotal – potentially pricing Thursday.  PLUS…Pensare’s vote to extend on Monday, the 28th.  Monday should be a helluva day with two pricings and a vote…which means, better fuel up on Sunday. 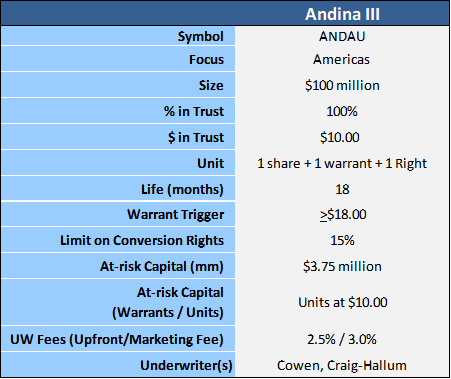