CF Finance Acquisition Corp., debuted their SPAC early Friday afternoon with a filing for $250 million and if you haven’t already guessed, the “CF” stands for Cantor Fitzgerald, which is sponsoring this SPAC. This deal has a number of impressive names attached to it, but first, let’s look at the headline terms.

As stated above, CF intends to raise $250 million and will focus on companies in the financial services or real estate services sectors.  Furthermore, CF will have 18 months to find an acquisition and the unit will be comprised of one share and one full warrant.  CF also intends to over fund the trust at 101% for a $10.10 pro rata amount per share at IPO.  A more complete summary of terms is provided below. 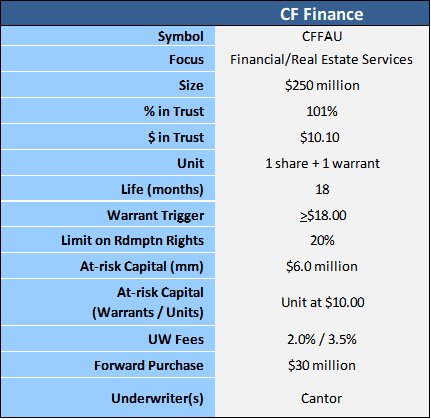 Looking at the management team, CF is being led by Howard Lutnick, as Chairman and CEO, and for those who do not know Howard, he has served as President and Chief Executive Officer of Cantor since 1992 and as Chairman since 1996.  They didn’t bring out just anybody from Cantor for this deal, they brought out the head honcho.

CF Finance also has Anshu Jain, serving as President on this team.  Mr. Jain is President of Cantor (since January 2017) and, if you recall, Anshu Jain was Co-CEO of Deutsche Bank (another big SPAC bank) from June 2012 to June 2015. Plus, the teams also includes Henrique de Castro, who has been an advisor to Cantor since 2015, and was the former COO of Yahoo! Inc. from 2012 to 2014.  Impressive names all around.  So why such expensive terms?

Well, given the current SPAC climate (which has been unfavorable to management teams as of late), it would be better for Cantor to go out with easily sell-able terms so that Cantor (as underwriter) can protect their SPAC team (and boss) from having to amend terms not in their favor halfway through a roadshow.  Totally understandable. However, this team is also not necessarily “deal guys”. Granted, the prospectus illustrates in the summary section the many successful acquisitions Cantor has done, but how intimately involved were these SPAC team members in those deals? So the terms are probably because of a little bit of both reasons and maybe the former more so than the latter.

However, what was also very interesting were the draft registration statements which get filed along with the initial S-1.  These draft registration statements (DRS) are filed confidentially and allow the underwriters to “test the market” with terms before filing publicly.  They are sometimes interesting to look at and definitely so in CF’s case.  For instance, the previous DRS filed on 9-18-18, allowed for the team to use an unlimited amount of interest earned for their working capital.  That’s not to say they would have used all of it, but there was no cap.  Obviously, in light of Hunter Maritime, this was amended because….yeah, that’s not gonna fly right now.

All told, this looks like a decent deal and the terms are extremely sell-able. Plus, this is a Cantor deal through and through and they are experienced SPAC veterans.  One other note:  there is a conflict with Cantor as underwriter and sponsor so they’ve brought in BTIG as their “qualified independent underwriter”.  BTIG is not on the cover, but that’s probably because Howard wants to make this a 100% CANTOR deal and that means no one else on the cover.  That’s just a theory though.

This deal should price the second week of December, making it SPAC #44 for 2018.  Stay tuned for further developments.